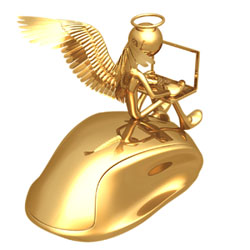 We live in a truly digital age. It’s nearly impossible to do anything or go anywhere without a smartphone or computerized or generated something.  The early nineties was a time when for all practical purposes – the Internet as we know it today was in its infancy.  Today there are all kinds of digital scams, hackers lurking around every cyber corner and a lot of cyber bullying. But there are also many acts of kindness, paying it forward and lots of interactive success stories. We think the time has come to make once again that the community of people who use the Internet for the benefit of others. These are the people (including corporations within the reproductive and adoption industry) that go above and beyond to help others. They pay it forward with selfless determination to help others.

In 2015, INCIID will present INCIID’s Online Angel Award in several categories to an individual, a professional and/or a corporation. These are the people that use the Internet to give back to the community.  Do you know someone that deserves an award for being an ONLINE Angel?

The History of the Online Angel Award

Heather’s story is a triumphant example of how going on-line can not only change lives, but enhance them. Her story shows that friendships made via computers can be as rewarding as any, even if participants never meet face-to-face. But most of all, it demonstrates how experiences in Cyberspace can be exhilarating and sorrowful, and just as in “real life,” love, support, encouragement and shoulders to lean on can be found.

Heather was a popular participant on the Infertility Bulletin Boards started through AOL at the beginning of the 1990’s. She and her husband, Steven, were in the IVF program at The New York Hospital-Cornell Medical Center in New York City. Heather struggled with massive uterine fibroids that prevented her from conceiving, but she was positive and hopeful despite eight years of infertility. After five surgeries, she finally became pregnant following her second in vitro fertilization attempt.

At this time, Heather moved on to the “Pregnant After Infertility” bulletin board on AOL, a subject created by INCIID cofounder, Nancy Hemenway. She shared all the fear and excitement of finally being pregnant with others on the board. As time neared for her planned C-section (previous surgeries made this necessary), her posts on the bulletin board became increasingly excited, and nervous. Then, just hours before the long-awaited time on January 8, Heather’s C-section was canceled because of intense snow storms on the East Coast. Her doctor couldn’t get to the hospital.

Two days later, on Wednesday, January 10, Heather and Steven became the proud parents of a beautiful and healthy baby girl they named Tara. Steven said he had never seen such a beautiful look of complete happiness in those brief moments when Heather laid eyes on daughter. Heather saw Steven holding Tara than fell into a coma. She never regained consciousness, and thirteen days later, Heather died.

This terrible loss has been retold throughout Cyberspace and people on all the on-line services and the Internet reacted with shock and sorrow. You didn’t have to know Heather to love her for all that she did to support others on-line.

INCIID established an award to recognize the contributions of an individual or group whose participation on-line has served to support, encourage and educate others about infertility. It is named the “Heather Bruce Thiermann Online Angel Award,” and Heather was the first recipient, posthumously honored. Steven accepted the award in March, 1996 at INCIID’s conference.

At INCIID, we continue the mission to educate and support infertility consumers through online education and the “From INCIID the Heart IVF Scholarship Program”. INCIID works very hard to educate others, especially about their options regarding IVF. helps individuals and couples explore their family-building options. INCIID provides current information and immediate support regarding the diagnosis, treatment, and prevention of infertility and pregnancy loss, and offers guidance to those considering adoption.