NIAW 2016, Sara’s Story: The path takes you where you were always meant to be

NIAW 2016, Sara’s Story: The path takes you where you were always meant to be 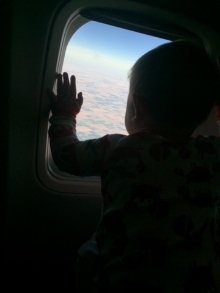 I never fully believed stuff like this, back Then. Sure, it sounded good. But Now… Now I know how true it is. The path takes you where you were always meant to be. In this moment tonight. Rocking baby boy. He’s just finished a bottle after waking up crying. He shouldn’t be hungry yet, but he spent all evening crawling and pulling up and smiling a gummy grin of pride. So that left no time for much milk. So I hold his 21 pound, solid frame firmly in my arms. Like I’ve said before, he just fits. As he sucks the last few drops of his bottle, his eyes close. His head twitches and nods back and forth, cradled in the crook of my arm. He’s got one hand by his face and the other casually folded behind his head. He’s taking slow, deep breaths. He’s 7 months, wearing 12 month pjs, and his tone little belly sticks out between the shirt and pants. His head nods and twitches some more. His hair is getting lighter. And thicker. It sticks up more on the left side than the right, no matter what I do to it. His skin is soft. His lips are perfectly rounded and at rest. Until he starts “sucking his fake paci”. If I had him Then, would I notice each detail? Would I appreciate him as much? I’m certain the answer is “NO”!  If things happened the way I hoped so many times, I wouldn’t be here. Now.

I wouldn’t cherish and savor each day with him. The way I am tonight. The way I have done each day since the day in early August when I first saw his little face.  I wouldn’t have endured the amount of pain I did, that whittled me to my very core. That revealed my anxiety disorder. I would be a neurotic, impatient, frustrated mom were I made a mom Then. I’m treated Now. I feel like I can handle anything.  I wouldn’t have the relationships I have Now. My sisters in embryo adoption. Fellow recipients. My son’s special genetic mom. (And genetic extended family- he’s not an only child after all). I hated waiting. I hated the suffering. The sacrifice. The running on a hampster wheel that never seemed to result in anything positive.  I’m here Now. I’m where I’m supposed to be.

So how did we get to Now? What was the Then all about? My husband and I decided to not have biological children together to avoid passing a hereditary neuromuscular disorder. We tried donor sperm with 3 IUIs- no luck. We became certified foster parents. It wasn’t a feasible plan with the way our local foster care office handled referrals. We applied for waiting children through the foster care system with no response. We then sought domestic infant adoption. Because, you know, as everyone says, “Why don’t you ‘just adopt’”? We were on a waiting list of nearly 50 families when only 7 placements were made in a year. Our profile was shown once but the mom never placed. We applied for private adoption situations. Nothing panned out.

My husband says he could have kept waiting. But I was losing hope. I was desperately grasping to anything I could. I researched day and night. Other agencies. Private networking.and then I discovered embryo adoption. It’s not legally “adoption”, but in our situation, that feels like the correct language. And one of the most well-known embryo adoption clinics in the entire nation was mere hours from our house.

So we dove in. We transferred. Negative. We transferred. A devastating miscarriage. Our money was gone. Our strength was nearly gone. All 7 of our embryos we initially adopted were gone. We rematched. One final chance. This was it. It had to work.

We transferred two beautiful blastocysts (five day old embryos) on a Wednesday. I started feeling queasy on Saturday. I got a positive home test on Sunday, two beautiful pink lines. Due to Thanksgiving, I had to wait til Friday for the nervewracking beta news. Yep! Very pregnant, if there is such a thing. Pregnancy after a miscarriage was very difficult. I hated ultrasounds, even the one where I heard his heartbeat the first time and the one where I found out his sex. I had a stubborn SCH (subchorionic hematoma- common in FET pregnancies) that caused ongoing panic.I muddled through pregnancy, trying to stay in one piece.

Four years after we began the journey to be parents, lots of tears and money and shots later, they placed a nearly 9 pound, perfect baby boy on my chest. He lifted his little head and peered into my eyes. Everything I went through melted away. He was here. He is mine. He has healed me. Those years were dark. I would hate to relive them. But it was worth it. He is worth it.

To read more about my journey, including my very open relationship with my son’s gracious and wonderful genetic family, please check out my blog- chroniclesofanadoption.blogspot.com. Although we live across the country, we’ve met up 5 times in 8 months. We’ve stayed at each others’ houses and met each others’ extended family. It’s been a beautiful dance to develop a relationship with the family we owe ours to.