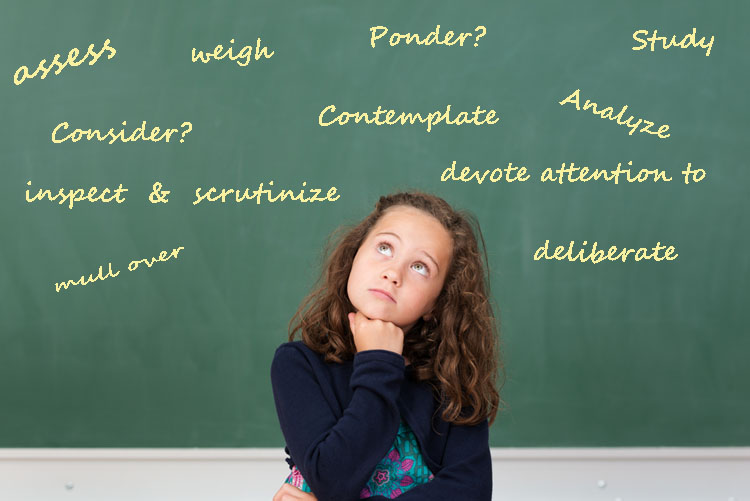 What Does “Consider” Actually Mean: More than you ever wanted to know about what the word consider means.

As if there were not enough things about how school districts interpret various regulations in the IDEA and Section 504, the word “consider” seems to be one of the most irritating roadblocks we face during IEP and 504 meetings.

You present your information, participate in the meeting, you show the Team members your independent evaluations and other information about your child’s disability and what happens?

The school says, “thank you – we considered it.”

The information you gave to the school falls into an education records dark hole.

IDEA 2004 tells us that in developing the IEP, the IEP team shall consider:

2.  the parent’s concerns for enhancing the child’s education

3.  the results of the initial evaluation or most recent evaluation

So what does the word consider mean? That word is a verb, and has two forms.

Form 1. The district must consider a parent’s independent evaluation. This form of the verb is connected with action. (Transitive verb)

Form 2. Ms. Sped considers me to be a pain in the neck.

According to Black’s Law Dictionary, the word consider means to think about, or to ponder or study and to examine carefully.[3] (Intransitive verb)

As far as I can determine, each time the word “consider” appears in the IDEA and the federal regulations that implement the IDEA, the word consider is used to signal action.

These are some synonyms for that form of the word consider:

The other form of the word consider is also a verb, but it is used to indicate thinking about something (I consider the IDEA as a good law). Another example is “I consider Mr. Palmer to be a pain in the neck advocate”.

What have hearing officers and courts said the word consider (in the action sense) means?

Here are five illustrative decisions and one decision that limits the amount of consideration.

“[T]he failure to receive and consider parental information, including evaluations they may obtain, directly denies parents the pivotal role they should enjoy in the development of their child’s placement. This role includes not only providing evaluations or other information, but discussing such information. Consideration of such outside information also ensures that a program is individualized and provides a check on the judgments being made by school officials regarding the child.”

The court ruled that the school district denied parents of a student with autism the opportunity to meaningfully participate in the IEP process when it placed their child in a program without considering his individual needs.

The 6th Circuit concluded that although the parents were present at the IEP meetings, their involvement was merely a matter of form and after the fact because the district had, at that point, predetermined the student’s program and services. It found the district’s predetermination violation caused the student substantive harm and therefore denied him FAPE. Remedy: Private school tuition reimbursement. (The District Court in Deal ex rel. Deal v. Hamilton County Bd. of Educ., 46 IDELR 45 (E.D. Tenn. 2006) subsequently determined that the district’s eclectic program was substantively appropriate.)

The court ruled that the IEP was significantly defective and the school district limited the parent’s right to participate in IEP formulation by refusing to discuss the placement proposed by parent, delaying scheduling an IEP meeting for 23 months, and failing to finalize the resulting IEP for another year. Remedy: Private school tuition reimbursement

The US District Court (Maryland) ruled that an IEP team’s failure to consider the private evaluations submitted by the parents was such a serious violation of the IDEA that failing to consider the parent’s evaluations established that the school district denied the student of a free appropriate public education.

However, according to one court, consideration can go too far.

The US District Court for the Eastern District of Pennsylvania said,

“Thus, plaintiffs’ argument is only compelling if, in requiring the IEP team to “consider” the severity of a student’s disability, the regulation requires that the team formally and explicitly deliberate over the taxonomy of the student’s diagnosis. This interpretation would betray the sensible understanding of “consider.”

“The Oxford English Dictionary defines “consider,” in its transitive form, as follows: “to contemplate mentally, fix the mind upon; to think over, meditate or reflect on, bestow attentive thought upon, give heed to, take note of.” Oxford English Dictionary Online (2nd ed. 1989). This definition does not suggest that an object of consideration must be articulated and actively discussed. One may “consider” a factor relevant to a decision by bearing it in mind and allowing it to inform and shape one’s reflections on a matter.”

Thank you for this interesting question. I hope this little article answers your question about what the word consider means in special education.

As you deal with the school district, remember that words have meaning – sometimes more meanings than we realize.

Brice is a special education advocate who works with parents across the country. He has practiced, taught and written about special education advocacy since 1995.  His articles have appeared in The Beacon Journal, published by Harbor House Law Press, Autism Asperger’s Digest, published by Future Horizons, Inc., Family Focus, the quarterly newsletter published by Families for Russian and Ukrainian Adoption (FRUA), and various articles appearing at www.wrightslaw.com. Some of the Wrightslaw articles are: Do the Documents Speak for Themselves? How to Prepare Your Case, Learning To Negotiate Is Part of the Advocacy Process, and How and Why to Tape Record Meetings.