Vitamin D Could Play a Role in Successful Treatment of Infertility

Vitamin D Could Play a Role in Successful Treatment of Infertility 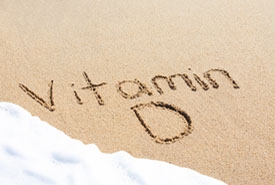 Vitamin D could play a role in treatment of infertility.

Not a day goes by where we don’t hear about vitamin D and its miraculous healing and healthy powers. What can it do for those who suffer with infertility? While some of the scientific community thinks the jury is still out on whether we should supplement with vitamin D – you might want to take a look at some of the research and decide if this might be an important component of your fertility treatment – that is if you haven’t already done so!

Vitamin D Study Published in the European Journal of Endocrinology

In late spring of 2014 a study was published by the European Journal of Endocrinology that suggests Vitamin D may play a role and be influential of endocrine disorders and diseases such as diabetes, Addison’s disease and PCOS (to name a few). This particular research study debates the role vitamin D plays with these conditions. The objective of the study was to assess studies and evaluate the relationship between vitamin D and fertility.

The evidence from basic science supports the idea that vitamin D has a role in many endocrine conditions.

In Reviewing some of the other studies:

“Given the high prevalence of infertility as well as vitamin D insufficiency in otherwise healthy young women and men and the possible role of Vitamin D and fertility in human reproduction, research might lead to new therapeutic approaches such as vitamin D supplementation in the treatment of female and male reproductive disorders. Recognizing the fact that sperm quality is decreasing and infertility is a problem affecting about 10–15% of couples, this review might provide a rationale for further research in this area. We want to emphasize the fact that in infertility cases drastic improvements in reproductive failure may not be achieved by vitamin D treatment alone; however, vitamin D supplementation is a safe and cheap treatment, which might have some beneficial effects on human reproduction [Emphasis is INCIID’s]. Moreover, the impact of vitamin D supplementation on androgen levels deserves further investigation with respect to the adverse consequences of both vitamin D deficiency and male hypogonadism.”

According to Joseph M. Mercola (mercola.com) an alternative medicine proponent and osteopathic physician, up to 85 percent of the population may have insufficient levels of vitamin D and furthermore are unaware of their deficiency. There are also numerous studies supporting his point of view ( See also  – The vitamin D epidemic and its health consequences  and Scientific American.

There is an ever-growing body of evidence and research that supports the crucial role of vitamin D in disease prevention as well as the health benefits.

There are also studies that support the idea that optimum levels of vitamin D can help prevent and lower the risk of cancer by slowing down growth of cancer cells and boosting the immune system so it can destroy the mutated cells.

We obtain vitamin D, a steroid hormone, from direct sunlight exposure, food and supplementation. Sounds simple doesn’t it?  But there are different types of vitamin D. The most common are D2 and D3.

Acording to Dr. Mercola, “Vitamin D, a steroid hormone that influences virtually every cell in your body and has been positively linked to health conditions ranging from cancer to heart disease, may significantly boost fertility in both men and women.” This is not the first time the “sunshine vitamin” has been linked to infertility. In 2008, Australian fertility specialist Dr. Anne Clark found almost one-third of the 800 infertile men included in her study had lower than normal levels of vitamin D, (bear in mind here that “normal” does not equal “optimal” — so by optimal standards, the rate of vitamin D deficiency was likely far higher than one-third) stating that:1

“Vitamin D and folate deficiency are known to be associated with infertility in women, but the outcomes of the screening among men in our study group came as a complete surprise. Men in the study group who agreed to make lifestyle changes and take dietary supplements had surprisingly good fertility outcomes.”

Other articles and research about Vitamin D and Fertility

Value of follicular fluid via an IVF Program January 2014:

Role of vitamin D in ovarian physiology and its implication in reproduction: a systematic review.

Relevance of vitamin D in reproduction