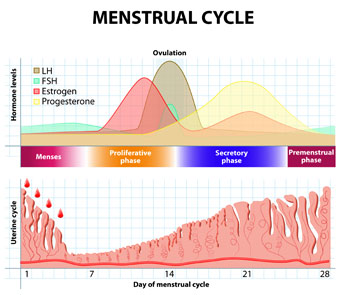 The classic findings of menstrual cycle abnormalities; increased sexual hair growth and obesity that characterize PCOS are as follows.

Menstrual Distrubance
Obviously, a detailed menstrual history including menarche (onset of periods), pattern of menses (periods) in the past and changes in the number of days of flow, amount of flow and number of days between menses should be recorded. Often in PCOS patients, the menarche occurs at the usual age of 12-13 years. Some PCOS patients may start menstruating earlier. Not uncommonly, PCOS patients may first be seen by a physician for lack of menses. Any female who has not had menses by age 16 should be evaluated.

The menstrual cycle may at first be regular, but by high school, cycles start to lengthen and may be skipped. Often during this time, oral contraceptives are started. The “‘pill” usually regulates the menstrual cycle and may give the false impression that all is well. Usually in the teenage years, the other symptoms of skin and weight problems also start to be seen. Some PCOS patients easily establish a pregnancy in these early years. Occasionally, birth control pills may even increase the chance of pregnancy by suppressing abnormal hormonal production. Often a gynecologist sees the PCOS patient when she is in her 20s after stopping the pill, and her periods. Some PCOS patients have quite regular 28 days cycles, but the diagnosis should be suspected in individuals with cycle length over 35 days. Some patients have no bleeding unless some form of medication, usually a progestin, is given. In some there is excessive bleeding, or long periods of spotting. It is thought that the age of menopause in individuals with PCOS is about the same, age 50, as other women.

While virtually never mentioned in medical publications, or recognized by physicians, it seems that chronic pelvic pain and premenstrual (PMS) symptoms are quite common. Given the chronically abnormal hormonal patterns, the capacity of hormones to alter body fluid and even the enlarged cystic ovaries, these findings should not be surprising.

Hair and skin problems
The skin manifestations associated with PCOS are possibly more common than either menstrual cycle irregularity or obesity. Disorders of the skin in PCOS patients are related to an increase in level of male hormones (hyperandrogenism). This may be due to an absolute increase in androgen level, or an alteration in ratio of hormone levels. A third possibility is an exaggerated response of the skin to relative normal androgen levels. The end result of all three of these possibilities is the same and includes: acne, seborrhea, balding, hidradenitis suppurtiva (inflammation of the specialized sweat glands in the arm pit and groin), acanthosis nigricans (see below) and hirsutism.

Hirsutism is defined as an increase in amount and/or coarseness of hair distributed in the male pattern in a female. This is opposed to hypertrichosis, which is excessive growth of non-sexual hair. The issue of facial hair is usually self-evident, but a good screening test is the amount of hair between the umbilicus and pubic hair line. Other areas of male pattern hair growth include ‘sideburns,’ lower neck, lower back and inner thighs. A faint moustache is quite common and may be more related to family trait and ethnic group than hormonal imbalance. The same can be said for occasional ‘stray’ hair around the breasts. Outside hirsutism, other manifestations of hyperandrogenism are often dismissed, or not recorded in the gynecologist’s evaluation.

Acne and seborrhea occur quickly as androgens rise. Androgens increase sebum, which is a combination of skin oils and old skin tissue. Increased sebum causes plugging of skin pores. Bacteria that thrive on sebum are increased, resulting in inflammation. The inflamed skin pore is called acomedon. Closed comedones are “whiteheads,” while ”blackheads” are open comedones. The black color comes not from dirt, but from the breakdown of keratin, a natural skin product. Increased male hormone levels also cause seborrhea. A particularly common skin condition and one not usually associated with hormonal alterations is dandruff. Contrary to what is generally believed, dandruff is caused by oily, not dry skin and is a variety of seborrheic dermatitis.

Many women complain of skin problems that wax and wane with during the menstrual cycle. In regularly cycling women, the second half of the menstrual cycle is characterized by increased progesterone levels. Progesterone is a weak androgen and may create a situation of relative hyperandrogenism. Around the time of menstruation estradiol is decreased. Low levels of estrogen (hypoestrogenism) also create a situation of relative increase in androgens with resultant increased oiliness and inflammation of the skin.

One of the most distressing of hyperandrogenic skin disorders isalopecia (balding). The most androgen sensitive area of the scalp is the vertex, the highest point of the head. Frontal balding and anterior hairline recession is seen only in the more severe cases of androgen excess. As can be an imagined, the mechanism for hair growth (and loss) has been extensively studied, but no unified theory has emerged.

A search for acanthosis nigricans (AN) should be a part of every physical exam of the PCOS patient. AN is usually described as a velvety, raised, pigmented skin changes, most often seen on the back of the neck, axillae and beneath the breasts. AN is often seen in association with skin tags (acrochordons). Possibly the best description is that it looks like the affected area is ‘dirty’ and would benefit from scrubbing. Obviously this is not the case. There is an association of this finding with simple obesity as well as other endocrine disorders. AN should always alert the clinician to a risk of diabetes, major lipid abnormalities, and hypertension. Although less common, it may be a warning signal of cancer.

Elevated androgen levels may be only a part of the problem. For androgens to have an effect on the skin they must bind together with an androgen receptor in the skin. There may little, or no, physical evidence of hyperandrogenism despite very high androgen levels, if the androgen receptor is lacking or present in relatively low numbers. The number of androgen receptors varies among different ethnic groups and individuals. Northern European women with PCOS are more likely to be hairier than Asian women. A third requirement for androgen action in the skin, besides androgens and receptors, is a specific enzyme called 5a-reductase. Testosterone must be converted to dihydrotestosterone (DHT) by this enzyme to exert its effect. Only sexual hair follicles contain the necessary enzymatic machinery for conversion of circulating androgens to DHT. A fair skinned individual may have little excess hair growth despite high levels of testosterone, due to absence of the specific androgen receptor, or enzyme converting capacity, in the hair follicles. Another individual may be quite hirsute with no apparent abnormality in circulating hormones.

Obesity
Whether obesity is a cause of PCOS or obesity is a result of PCOS is unclear, but it seems that the latter is more likely. A distinction has been made between the “lean” and “obese” PCOS patient. The typical obesity of PCOS is described as “centripetal,” related to fat distribution in the center of the body, as opposed to the thighs and hips. This, “apple” opposed to a “pear” type of fat distribution clearly is associated with greater risk of hypertension, diabetes and lipid abnormalities. Certainly, many metabolic derangements improve with weight loss, but PCOS is not ‘cured’ by weight reduction. Almost always, individuals with PCOS gain weight very easily and lose it only with great effort. Everyone knows that some individuals consume large quantities of food and never gain weight while others work hard just to stay ‘fat’ instead of severely obese. Vanity keeps some from weighing much more than they might, if only they were less vigilant.

When seeking medical help for weight control, too often, the obese patient has been told to exercise more, or to eat less. Clearly, this over- simplification fails to take into account the high likelihood that individuals vary in the way their bodies utilize calories. Some use calories less effectively, or store fat more easily. A key to the way the body uses energy is insulin. Insulin is a hormone released by the pancreas in response to the breakdown of food into sugars, proteins and fats by the digestive system. Insulin promotes the storage of fat to ensure a constant source of fuel, calories, ensuring the body’s most efficient operation. As described in more detail below, PCOS increasingly has been linked to abnormalities of insulin and glucose metabolism. In the past, this may have been an adaptive advantage allowing survival against cold, or famine. Now, in part, a response to today’s sedentary lifestyle, obesity has become a genetically related disease, which may treated, but only with great personal conviction and effort. Certainly, weight loss can only be achieved when caloric expenditure exceeds caloric intake, but genetic, metabolic and environmental alterations make this a much more complex equation. Hopefully in the future, there will be relief, which is both more effective and less painful than our present treatment strategies.

Obesity may be the single most important health issue in the United States today. Obese individuals have greater risk of hypertension, high blood pressure, diabetes, cancer, stroke, gall bladder disease, and uterine cancer. But obesity alone does not explain everything, possibly not anything.