Clomid Use and Abuse

Clomid Use and Abuse 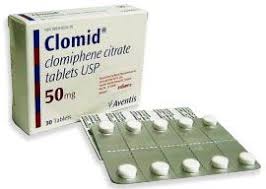 Some women can’t get pregnant because they don’t secrete enough LH and FSH at the right time during the cycle and, as a result, they don’t ovulate. For these women, the first drug doctors often prescribe is clomiphene citrate (Clomid, Serophene). This synthetic drug stimulates the hypothalamus to release more GnRH, which then prompts the pituitary to release more LH and FSH, and thus increases the stimulation of the ovary to begin to produce a mature egg.

Clomiphene is a good first choice drug when a woman’s ovaries are capable of functioning normally and when her hypothalamus and pituitary are also capable of producing their hormones. In short, the woman’s reproductive engine is in working order but needs some revving up.

Structurally like estrogen, clomiphene binds to the sites in the brain where estrogen normally attaches, called estrogen receptors. Once these receptor sites are filled up with clomiphene, they can’t bind with natural estrogen circulating in the blood and they are fooled into thinking that the amount of estrogen in the blood is too low. In response, the hypothalamus releases more GnRH, causing the pituitary to pump out more FSH, which then causes a follicle to grow to produce more estrogen and start maturing an egg to prepare for ovulation. Typically, a woman taking clomiphene produces double or triple the amount of estrogen in that cycle compared to pretreatment cycles

If a woman is menstruating, even if irregularly, clomiphene is usually effective, particularly if she develops follicles that aren’t reaching normal size. Usually, a mature follicle is about 20 millimeters in diameter, or about the size of a small grape, just before it ruptures and releases its egg. Clomiphene may help small, immature follicles grow to maturity.

A low estradiol level in a woman’s blood correlates with an inadequately stimulated, small follicle. A woman having a spontaneous ovulation cycle (that is, ovulating without the aid of fertility drugs) generally has peak estradiol levels ranging from 100 to 300 picograms (one trillionth of a gram)/ml. A woman may have enough hormones to produce an egg, but if her estradiol production by the follicles is low (less than 100 pg/ml), she may not adequately stimulate her cervix to produce fertile mucus or stimulate her endometrium to get ready to accept a fertilized egg for implantation. Clomiphene could boost the weak signals from the hypothalamus to the pituitary to the ovaries.

“A woman who ovulates infrequently, say at six-week intervals or less often, is also a good candidate for clomiphene therapy, since clomiphene will induce ovulation more frequently. The more a woman ovulates, the more opportunities her mature eggs have to be exposed to her husband’s sperm and, therefore, the greater her chance to become pregnant.

Clomiphene is also often effective for a woman with a luteal phase defect (LPD). A woman with LPD may begin the ovulation process properly, but her ovarian function becomes disrupted, resulting in low production of the hormone progesterone in the luteal phase of the menstrual cycle. Following ovulation, the ovary produces progesterone, the hormone needed to prepare the uterine lining for implantation of the fertilized egg, which has divided and entered the uterine cavity. A fall in progesterone levels in the blood during this critical time can interfere with early embryo implantation or, even if a fertilized egg has already implanted, cause a woman to menstruate too early and end a pregnancy within a few days after implantation.

Using an LH-urine detector kit or keeping a basal body temperature (BBT) chart can help a woman taking clomiphene determine whether the luteal phase of her cycle is shorter than the normal fourteen days. The luteal phase of the cycle, the length of time from ovulation until she menstruates, has a normal range of thirteen to fifteen days. Clomiphene can often “tune up” the hypothalamus and pituitary so they keep producing the hormones the ovary needs to manufacture progesterone throughout the luteal phase.

“Of women whose only fertility problem is irregular or no ovulation at all, about 80 percent will ovulate and about 50 percent will become pregnant within six months of clomiphene treatments. About three percent of women on clomiphene have multiple pregnancies, usually twins, compared with about one percent in the general population.

If a woman responds to clomiphene and develops a mature follicle (determined by adequate estrogen production and ultrasound examination), but has no LH surge by cycle day 15, then injection of the hormone human chorionic gonadotropin (HCG), which acts like LH, can be given to stimulate final egg maturation and follicle rupture, releasing the egg. The woman tends to ovulate about 36 hours after the LH surge or HCG injection, which can be confirmed by further ultrasound scans.

“Clomiphene is a relatively inexpensive drug, and is taken orally for only five days each month. The doctor attempts to initiate clomiphene therapy so that the woman ovulates on or around day 14 of a regular 28-day cycle. The simplest, most widely used dose starts with one daily 50 mg. tablet for five days starting on cycle day three or five. If a woman ovulates at this dose, there is no advantage to her increasing the dosage. In other words, more of the drug isn’t necessarily better. In fact, more may be worse, producing multiple ovulation, causing side effects such as an ovarian cyst or hot flashes, and most commonly, interfering with her fertile mucus production.

If a woman doesn’t ovulate after taking one clomiphene tablet for five days, then her doctor will usually double the daily dose to two tablets (100 mg) in her next cycle, and if she still doesn’t respond, then triple the daily dose to 150 mg, or add another fertility medication such as human menopausal gonadotropin (Pergonal) in the next cycle. Some doctors increase the dose up to 250 mg. a day, but this is NOT recommended by either of the drug’s two manufacturers. Women tend to have side effects much more frequently at higher doses.

If the dose of clomiphene is too high, the uterine lining may not respond completely to estrogen and progesterone stimulation, and may not develop properly. As a result, a woman’s fertilized egg may not be able to implant in her uterus.

Some women taking clomiphene experience hot flashes and premenstrual-type symptoms, such as migraines and breast discomfort (particularly if they have fibrocystic disease of the breasts). Visual symptoms such as spots, flashes or blurry vision are less common and indicate that treatment should stop.

The hot flashes are just like the hot flashes women experience at menopause when the level of estrogen circulating in the blood is low. The clomiphene fools the brain into thinking that blood estrogen levels are low.

Too often, doctors give clomiphene to women with unexplained infertility before the couple has a fertility workup, or even after they have a workup, but there is no evidence of an ovulation disorder. This empiric therapy may create new problems, such as interfering with fertile mucus production and often delays further evaluation that can lead to a specific diagnosis and proper treatment.

For a woman who has normal, spontaneous ovulation, driving the pituitary harder with clomiphene won’t make ovulation any more normal. If a woman has taken clomiphene for several cycles without becoming pregnant, then she and her fertility specialist should investigate other conditions that may be preventing her pregnancy.

After noting a good postcoital test (PCT) during a fertility workup, some doctors fail to repeat the test after placing a woman on clomiphene. A PCT needs to be repeated to check the quality of the woman’s cervical mucus while she is on clomiphene, since 25 percent or more of women who take the drug develop cervical mucus problems. It’s important for a woman to monitor her cervical mucus production during every cycle while trying to become pregnant, including her cycles while taking clomiphene.