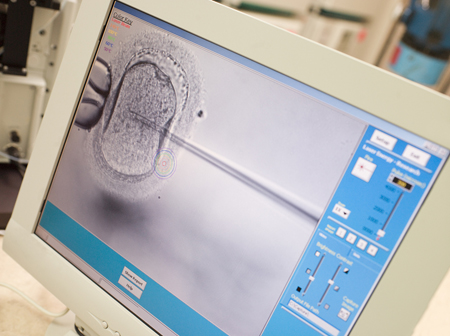 A tiny pipette is used to inject a single sperm into the awaiting egg in the revolutionary new procedure: Intracytoplasmic Sperm Injection

In any field of medical research, success is often measured in minute degrees, the impact of which may only be known to those whose careers are spent in the laboratories. Occasionally, however, there comes a discovery so astounding that it revolutionizes medical procedure. Such is the case with Intracytoplasmic Sperm Injection, or ICSI, a new infertility treatment utilizing micromanipulation technology that specifically addresses male factor infertility issues. ICSI is so remarkable, in fact, that most treatments previously used have been abandoned in its favor.

Male factor infertility can include any of the following problems: low sperm counts, poor motility or movement of the sperm, poor sperm quality, or sperm that lack the ability to penetrate an egg.

The first process used to address the problems of male factor infertility was called Partial Zona Dissection (PZD). Using PZD, the zona pellucida, or shell, surrounding a woman’s egg was opened, using either chemical dissolution or a sharp instrument to file through the shell. This process, while certainly a step forward in the relatively new field of micromanipulation, was considered rather passive because even with the zona opened there was no guarantee the sperm would enter and fertilize the egg. With PZD, frequently too many sperm would enter the egg causing genetic abnormalities and arrested development of the zygote. With any of those problems, a couple was not helped to achieve pregnancy through the PZD process.

This Metaphase II Oocyte has extruded its first polar body and displays a sunburst array of cumulus-corona cells. The cumulus cells must be removed before the ICSI procedure can take place.

A logical next step was a process called Sub-Zonal Insertion (SUZI), which was similar to PZD, but more aggressive. With SUZI, once the shell was punctured the sperm was then injected into the area between the zona and the egg, rather than left to find its own way. The sperm still had to enter the egg, but its chances were greatly increased with this specific placement. This process dramatically increased the success rate of in vitro fertilization (IVF), and could partially overcome poor motility and low sperm count. However, polyspermy (more than one sperm entering egg) was still a problem. It was still not possible to control the number of sperm entering the egg with the SUZI process. Few could have imagined how dramatically the ICSI process would change all that.

While at a clinic in Belgium, Gianpiero D. Palermo, M.D., currently assistant professor of embryology, the Center for Reproductive Medicine & Infertility, The New York Hospital-Cornell Medical Center, pioneered the ICSI process.
When a single sperm was injected directly into the egg, it virtually eliminated the problems and limitations found with previous treatments. Palermo and others studying ICSI found that not only did it address the issues of poor sperm motility and low count, but it was also successful with sperm that were considered less than ideal for an IVF process. In addition to normal sperm, with the ICSI process, Dr. Palermo has successfully used round-headed sperm, those collected directly from the epididymis and those previously cryopreserved.

The ICSI process takes place following a cycle during which fertility drugs are administered to the female partner to aid in the production of multiple eggs. The eggs are then surgically removed. In normal circumstances, the egg is surrounded by a cluster of cells known as the cumulus-corona cells, all of which must be removed before the sperm injection takes place. If cumulus were not removed, it could create a shadow that may impair viewing and jeopardize the injection. This removal also allows the embryologist to assess the maturity of the egg. Sperm is collected from the male partner, usually through masturbation.

Once eggs and sperm are collected, the actual process of injecting a single sperm into the egg is carried out in a laboratory using a petri dish or a glass slide with a well in the center. Though some tools used in the injection process are available commercially most embryologists prefer to make their own. Quality tools are essential to the overall success of an ICSI program. A glass holding pipette 40-50 microns in diameter is used to secure the egg, usually on the left side. An injection needle with an outer diameter of roughly five to six microns and an inner diameter of three to four microns, is used to pierce the egg membrane on the right side at about 3:00 o’clock. The injection needle has an extremely sharp or beveled end, one that will most easily pierce the egg membrane. For embryologists using a glass slide, the arm of the injecting needle can be straight or only slightly bent at the end. For those using a petri dish, the arm of the needle must be angled about 40 degrees to ensure manipulation can occur without interference from the lip or side of the petri dish.

Active sperm are chosen and placed in a drop of polyvinyl pyrrolidone solution, or PVP. This solution is dropped onto a viscous medium such as mineral oil and is used to slow down the activity of the sperm and also serves as a cleanser. It is necessary that active sperm be slowed so they may be properly viewed and so they are not damaged once drawn into the injecting needle. Though active sperm are chosen prior to being placed in the PVP, once in the solution, the sperm with the least amount of activity are the best candidates for injection. In fact, those that stick to the bottom of the well by their heads are often the best choices. The reason for this choice is that an actively moving sperm tail can whip around inside an egg and cause damage or even destroy it. In fact, before putting the sperm in the egg, the tail is pinched to immobilize it.

As with the selection of tools, the method used to stage the process is a matter of preference of the embryologist or technician. Commonly, the sperm are placed in a drop in the middle of the dish or slide, then surrounded by eggs that have also been placed in a viscous medium. In some cases, only one egg is placed in a droplet around the sperm in order to preserve their individuality , or some technicians prefer all sperm in one drop and all eggs in another. Both methods have been used successfully.

Once the egg is secured by the holding pipette, it takes less than 60 seconds for the sperm to be injected directly into the center of the egg. There are many factors that must be mastered to ensure success of the ICSI process, chief among them is successful penetration of the egg membrane, ensuring the sperm is not redrawn back into the pipette upon removal from the egg, and guarding against injecting too much medium into the egg along with the sperm. The skill of the technician is a critical factor in the success of the ICSI process. Remarkably, once the injecting pipette is withdrawn, the egg will close and assume its original shape within 60 seconds.

Once the egg is injected with a single sperm, it is observed approximately 14 hours later to see if fertilization has taken place, and 24 hours later to ensure that the egg has cleaved. In some cases, assisted hatching, or removal of anucleated fragments located between the cell divisions, is performed to ensure proper cleavage. If each step has occurred as planned, implantation of the fertilized egg into the female patient can occur within 72 hours of the ICSI process. In most cases, the number of embryos implanted into the patient depends upon her age. The following chart indicates a usual number.

ICSI – WHAT’S IN THE FUTURE

The future for the ICSI process is very promising. Researchers expect that the current fertilization rate of 65 percent will continue to improve. As stated previously, sperm selection for the ICSI process focuses on available motile sperm, but it is only a matter of time until the ability to select living, but non-motile sperm will help up the odds even more for couples seeking to have a baby. Currently, results are poor with sperm that don’t move as it is not known whether they are alive or dead The staining method currently used for determining whether non-motile sperm are dead or alive kills living sperm. In the future, a technique will be developed which will help determine which sperm are alive and viable for the ICSI process without killing them with the stain.

Another exciting breakthrough in the field of male factor infertility and micromanipulation is a process called Round Spermatid Nucleus Injection or ROSNI that specifically targets men who are not manufacturing sperm and have zero sperm counts. The ROSNI process involves taking immature cells (round spermatids) directly from the testicle, removing the nucleus containing the genetic material and injecting the nucleus into the female partner’s eggs, which are removed during an in vitro fertilization cycle. While this process has yet to produce a live birth, researchers believe it will eventually become a successful technique that will allow men who previous had no hope, to father a biological child.

Clearly, there continues to be much hope and promising news for couples facing infertility.

Dr. Marc Goldstein is a professor of urology and director, Male Reproduction and Microsurgery, and Dr. Zev Rosenwaks is a professor of obstetrics and director of the Center for Reproductive Medicine and Infertility. Both are at The New York Hospital-Cornell Medical Center. Linda Davey was an INCIID cofounder and holds a journalism degree from North Texas State University.